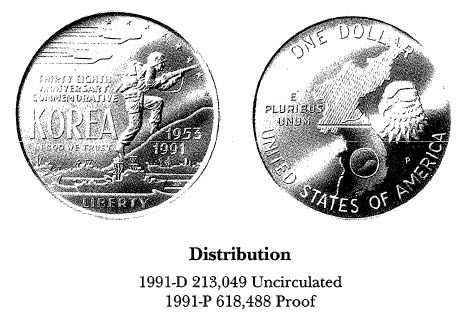 Coinage Context
Korean War Memorial
In 1991 commemorative silver dollars were pro-duced to observe the 38th anniversary of the end of the Korean War ( primitively called the Korean Con-flict ) and to honor those who served there. Coins were struck in Uncirculated and Proof finishes. public Law 101-495 approved on October 31, 1990, provided for the mintage of not more than one million coins, all to be struck during the calendar year 1991. A $ 7 overcharge was intended “ to establish and erect the Korean War Veterans Memorial in the nation ‘s capital to honor those who served. ”
Designs

The enabling act provided that “ Each mint shall bear a appointment of the value of the coin, an in-scription of the years ‘1953-1991, ‘ and the inscriptions of the words ‘Liberty, ‘ ‘In God We Trust, ‘ ‘United States of America, ‘ and ‘E Pluribus Unum. ‘ “ The designs were selected by the secretary of the Treasury after consultation with the Korean War Veterans Memorial Advisory Board and the american Battle Monuments Commission, according to a Treasury Department news publish. Designs were solicited only from employees of the Engraving Department of the United States Mint .
The obverse design of the Korean commemorative dollar is by John Mercanti. Featured are two F-86 Sabrejet combatant aircraft flying to the right, a helmeted soldier carrying a backpack climbing a hill, and the inscriptions : THIRTY EIGHTH/ ANNIVERSARY / COMMEMORATIVE / KOREA / IN GOD / WE TRUST /1953/1991. At the bottom of the mint are five Navy ships above the word LIBERTY .
The reverse of the Korean War anniversary eloquent dollar, the work of T. James Ferrell, depicts an draft map of North and South Korea, divided. An eagle ‘s head ( representing the United States ) is depicted to the right. Near the bottom is the symbol of Korea. Inscriptions included E / PLURIBUS / UNUM ( in three lines ), ONE DOLLAR, and UNITED STATES OF AMERICA .
Minting and Marketing

Commemorating: 38th anniversary of the goal of the Korean War.
Obverse motif: Soldier and the implements of war.
Reverse motif: Map of Korea.
Authorization date: October 31, 1990.
Dates on coins: 1991 ( and 1953 ).
Date when coins were actually minted: 1991.
Mints used: Philadelphia and Denver.
Maximum quantity authorized: 1,000,000.
Total quantity minted: Information not released by the Mint.
Quantity melted: Information not released by the Mint.
net number distributed : 213,049 Uncirculated 1991-D ; 618,488 Proof 1991-P.
Issued by: U.S. Mint ( Customer Service Center, United States Mint, 10001 Aerospace Road, Lanham, MD 20706 ).
Standard original packaging: Various options. official sale prices : Proof Philadelphia Mint coins $ 28 in promote ( later $ 31 ) ; Uncirculated Denver Mint coins $ 23 in advance ( by and by, $ 26 ).
Designer of obverse: John Mercanti, Designer of reverse : T. James Ferrell .
Interesting facts: The Korean War commemorative dollar was produced in a haste ; and there was no clock for a design contest involving outside artists. In case anyone thought it was a even is-sue silver medal dollar ( none of which had been minted for distribution since 1935 ), an inscription notes it is a “ COMMEMORATIVE, ” the entirely such self identifying coin in the series !